* To get the reduction it’s necessary to show your Alitalia Boarding Pass from/to Naples at the ticket office within 30 days from the date of the visit.

A magnificent palace dating back to the 17th century where you can admire the final masterpiece of the great master Michelangelo Merisi da Caravaggio, The Martyrdom of Saint Ursula and a collection of 18th and 19th century works by van Wittel and Pitloo.

* To get the reduction it’s necessary to show your Alitalia Boarding Pass from/to Naples at the ticket office within 14 days from the date of the visit. An emotional journey that conducts visitors in the new section of the underground of Naples. The Tunnel was built in 1853 by Ferdinand II of Bourbon, who, concerned about the outbreak of rebellion, he asked for an escape from the Royal Palace to the barrack in Via della Pace, now Via Morelli. The work was uncompleted and, during the second World War, was used by residents of the area as a military hospital, later becoming the Hall Judicial Deposit. The war left its mark even in the subsoil. That’s way there are handwrite, folding beds, messages of wish and desolation of those who lived it and still maintains its memory. Along the tunnel there are also the evidences, 530 meters, where visitors can discover the history of real life. Through the spacious streets, it’s easy reachable the network of tunnels and cisterns of seventeenth-century, large buildings, where worked the “pozzari”, the only connoisseur of Naples underground. The show is stunning, but that’s not finished. On Via Morelli appear statues dating back to fascist period and many cars and motorcycles, abandoned for years, freed from piles of rubbish, arranged and illuminated ad hoc for the route.

Until 31st of December € 2,00 discount for Alitalia Passengers on full adult entrance tickets (over 25).

* To purchase your discount ticket you will required to show at the Museum ticket office, your boarding pass for an Alitalia flight to/from Naples, taken 10 days or less before the purchase. 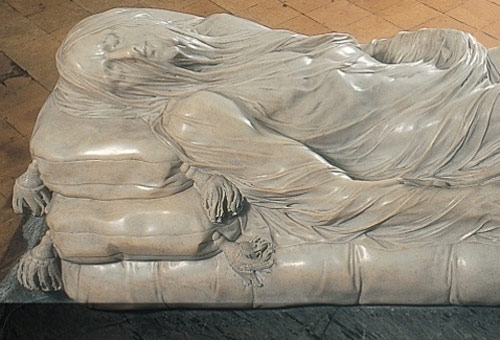 Placed at the centre of the nave of the Sansevero Chapel, the Veiled Christ is one of the most famous and impressive works of art in the world. It was the Prince’s wish that the statue be made by Antonio Corradini, who had already done Modesty for him. However, Corradini died in 1752 and only managed to make a terracotta scale model of the Christ, which is now preserved in the Museo di San Martino. So Raimondo di Sangro appointed a young Neapolitan artist, Giuseppe Sanmartino, to make “a life-sized marble statue, representing Our Lord Jesus Christ dead, and covered in a transparent shroud carved from the same block as the statue”. The swollen vein still pulsating on the forehead, the wounds of the nails on the feet and on the thin hands, and the sunken side finally relaxed in the freedom of death are a sign of an intense search which has no time for preciosity or scholastic canons, even when the sculptor meticulously “embroiders” the edges of the shroud or focuses on the instruments of the Passion placed at the feet of Christ. Sanmartino’s art here becomes a dramatic evocation, that turns the suffering of Christ into the symbol of the destiny and redemption of all humanity.

Come and discover a new way to enjoy your holiday!
Buy your Package of Yoga lessons and make your holiday relaxing and harmonic!

Famous at the global level, the excavations of Pompeii is the only archaeological site in the world, along with that of Herculaneum, capable of returning visitors a Roman town, whose life has remained firm to a distant morning in 79 AD, an era from which the Vesuvius decided to cancel by earth orbit.

Take a look at all the folklore and cultural events in the enchanting city of Naples!!!